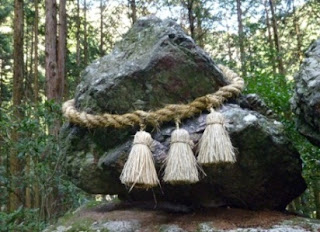 When Japanese people go to see the autumn leaves and trees, we call it, “maple hunting”. Normally, “hunting”means to chase animals and birds to kill them, and this is the same in Japanese, but according to the dictionary, it also means, “going into nature to look at plants and to enjoy them”. This time, I’d like to introduce a place where you can enjoy hiking and beautifully coloured leaves.
Read more »
Poster: KIA Time: 4:47 PM 3 comments: 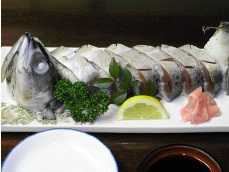 When we think of the seafood delicacies of Kochi, Katsuo-no-tataki (lightly-roasted bonito) is not the only dish that comes to mind. Mackerel-shaped sushi (Saba-no-sugatazushi) is another Kochi favorite. The sushi is often placed on a sawachi (a large and colorful platter) and is also available as “ekiben” (a boxed meal) at JR Kochi Station. As you can imagine from its name, all the parts of the fish – from the head to the tail – are used.
Read more »
Poster: KIA Time: 3:54 PM No comments: 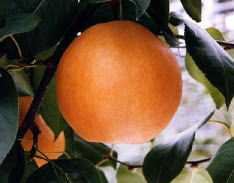 The Japanese nashi (pear) is a completely different shape compared to its Western counterpart. Japanese nashi are round, like apples. Two kinds of nashi cultivated in Kochi and Niigata were cross-bred, producing a new variety. “NIITAKA-nashi” was named in 1926; “NII” comes from Niigata and “TAKA” comes from Kochi. (Ko is also read as Taka.)
Read more »
Poster: KIA Time: 3:32 PM 2 comments:

chiya
postpositional particle. Used at the end of a sentence as an emphatic, often to remind.
Example: dokoni ikiyuuga? kyo wa kekkonkinenbi chiya (Where do you think you are going? It’s our anniversary today!)
soko ni haittara ikan chiya! (I’m telling you, you’re not supposed to go in there!)
Standard Japanese: －teba
Read more »
Poster: KIA Time: 4:07 PM No comments:

tsumu (te-form: tsunde)
v. to give a person a ride
Example: shinai ni iku nara tsunde ittekureru? (If you’re going into the city could you give me a ride?)
Standard Japanese: noseru
You can use this verb for both things and people.
Read more »
Poster: KIA Time: 3:51 PM No comments:

Although people in Kochi usually use Tosaben in casual spoken language, it has its own grammar. Let’s study some points comparing it with standard Japanese.

The Kochi Fighting Dogs (abbreviated as Kochi FD below) was birthed in 2005 as Kochi Prefecture’s team in IBLJ’s (Independent Baseball League of Japan) unified Shikoku Island League. After that, in 2006 IBLJ recruited investors from each prefecture in Shikoku and the present Kochi FD team was formed. The independent league, Shikoku Island League Plus, is a place where players who aim to enter major league and pro league can hone their talents. All the players are chasing their dream of entering into the pro league, and so far Keisuke Yasuda (Softbank Hawks), Katsuya Kakunaka (Chiba Lotte Marines), and Kazuya Iida (Softbank Hawks) have been able to move up to the NPB (Nippon Professional Baseball). In the past there were management difficulties that endangered the continuation of the team, but they were able to overcome them and become loved by many fans as Kochi’s representative baseball team.
This time, we were able to interview the director of the Kochi FD, Shigekazu Takemasa.
Read more »
Poster: KIA Time: 4:10 PM No comments:

Eggplants harvested in autumn are especially tasty as the Japanese proverb “Aki-nasu wa yome ni kuwasuna (Don’t feed autumn eggplants to your wife)” represents and their production volume in Kochi is ranked number one in Japan.
Here is a simple recipe with eggplants below. Please enjoy cooking at home.
Read more »
Poster: KIA Time: 3:09 PM No comments: 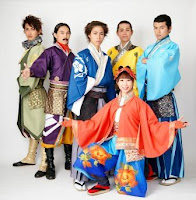 “Tosa Omotenashi Kinnoto” a.k.a. “Motekin” is a group of six members from Kochi Prefecture who are dressed as famous samurai warriors in the late Edo period. The group was formed in April, 2011 to liven up tourism in Kochi and performs at Kochi Tabi Hiroba located near the south exit of JR Kochi Station.
The members of “Motekin” are Ryoma Sakamoto, Hanpeita Takechi, Izo Okada, Shintaro Nakaoka, Yataro Iwasaki and the only woman in the group, Kawaraban-ya (news-sheets seller) Ryo. Their original songs and dance performances are partly inspired by Yosakoi and the colors of their costumes are based on specialties of where they were from.

A series of four-panel comics called Kinkon Tosanikki appears in the evening edition of the local Kochi Shimbun newspaper.


Grandma: Which is right?
Server: This one.