Kochi City Hall CIR Marisa
Susaki is famous for Shinjo-kun, but I heard that this city has an interesting tradition, so I went to Susaki City with staff members from KIA to learn more about it!
Getting to know “Morning” culture
It is said that on the ocean side of Susaki, after fishermen came back from sea, “eating breakfast at a café” later became known as “Morning” and spread from there. We immediately picked up a “Morning”/lunch guide map at JR Susaki Station. There were many cafes offering “Morning” all day, and it was very hard to decide on one as they all looked delicious.
Read more »
Poster: KIA Time: 3:12 PM No comments: Link to this post

Going through the temple gates
In this edition, CIR Naomi and KIA staff visited Gokokuji Temple in Iguchicho, Kochi City. It was still dark at 5:50 am, and a dim light was coming from within the temple gates. We went through, and the wooden building and plants, still wet with dew, looked beautiful. We could see the figure of the abbott through a small window, and with the scent of incense wafting from the entrance, it felt like we had entered a scene from a Ghibli movie!
The inside of the temple gave one a feeling of traditional Japan; the interior was simple and the moss-covered garden emanated an atmosphere of calmness. The abbott told us that he gets up at 2:30 am every morning and cleans the building, as well as incorporating Zen meditation into his daily practices—an ideology passed down from previous generations.
Read more »
Poster: KIA Time: 2:42 PM No comments: Link to this post

Kochi Lifestyle Q&A: Q. Are there consultation services for foreigners for various fields? A. Yes, there are such places below! 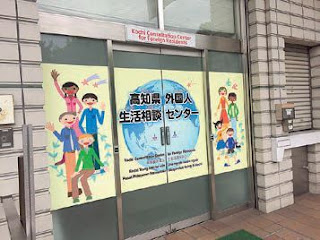 ①Kochi Consultation Center for Foreign Residents
This center opened as a new organization under KIA at the end of May 2019! It assists foreign residents in Kochi by listening and advising them with regards to their daily life, and helping them out with their troubles. It is equipped with telephone interpreting and translation applications, so feel free to contact the center in your own native language.
Read more »
Poster: KIA Time: 1:58 PM No comments: Link to this post