If you like manga, you may already know that Kochi is known as the Kingdom of Manga. Many famous manga artists sprouted from Kochi, the most well-known being Ryuichi Yokoyama, creator of Fuku-chan, and Takashi Yanase, creator of beloved Anpanman. Besides being home to a few museums inspired by these two manga artists (the Yokoyama Memorial Manga Museum, Anpanman Museum, and Poem & Märchen Gallery) Kochi also hosts a national high school manga championship called the Manga Koshien every year.
Read more »
Poster: Lisa Y. Time: 9:59 AM No comments:

It is October already….the fall season has arrived! We can see that many maple trees have turned red on the streets outside; it is very beautiful. Also, it is a great time to go out and look for something fun to do!
One of the things I highly recommend to do is to go and experience the Autumn Leaves Festival.
Read more »
Poster: KIA Time: 4:15 PM No comments: 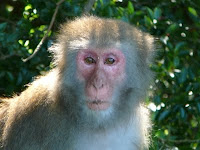 Of all the places I’ve been to in Kochi, one that sticks out the most is my visit to the monkey park in Otsuki Town. I had often seen monkeys while driving around the mountains in Kochi, but for the first time I was able to get up close and see them in a relatively wild habitat.

We don't have many hot springs in Kochi compared with other prefectures. But I believe that the quality of the water here is as excellent as that of famous onsen resorts such as Dogo in Ehime Pref. and Beppu in Oita Pref.