Do you know about Halal food? The Availability of Halal Food in Kochi

At a grilled meat restaurant a Japanese man is talking with a Muslim woman. The man notices a dubious expression on the woman’s face as he fries pork on the shared grill. “Muslims don’t eat pork, right? I’m frying beef and chicken too so you don’t need to eat it” he says, gesturing to the meat aside from the pork. Do you know why the Muslim lady felt uncomfortable? The lady felt uncomfortable because she was reluctant to eat meat that has been fried on the same grill as pork, which in Islam is considered unclean.
Rising Awareness of Halal Food
In recent years the number of visitors and students from Islamic countries coming to Japan has increased, and with the expansion of exportation to areas with high Muslim populations, awareness of Halal food has grown. In Kochi Prefecture as well there are Muslim students and residents, however we have heard that it is very difficult for them to find Halal food, which they can eat without worry.

In this issue, KIA staff and the CIRs went to a restaurant offering Halal food in Kochi City, as well as a business that wishes to see the expansion of businesses getting certified in Halal and exporting overseas. This time city hall CIR and practicing Muslim Marisa, was also included in the reporting team. Please have a read through of our up to date information on Halal food in Kochi Prefecture!
Read more »
Poster: KIA Time: 11:34 AM 16 comments: Link to this post

Kochi has one too! Halal Restaurant Eating worry-free at Bali Jasmine


If you go along the street in Yanagimachi, north of Obiyamachi, you will see a green sign on the second floor of the Shiroki building with “Bali Jasmine” written in large letters. This restaurant which opened in September 2016, is open for lunch and dinner every day except Thursday. Its draws are Indonesian and Indian cooking, and bringing authentic taste to Kochi is the goal of Yuni, the owner of this shop.

The interior is outfitted with Bali decorations, and it feels like you aren’t in Japan once you step inside. In addition to Indonesian classics such as nasi goreng and mie goreng, you can also eat Indian food such as naan and curry at this restaurant. There are no pork items on the Indonesian menu, but there are some on the Indian menu. Yuni is Muslim, and all the chicken and beef used in this restaurant is Halal. In accordance with Islamic teachings Indian menu items containing pork and Halal items are prepared using different cookware, and the cooking space is separated as well. For Muslims, eating at restaurants like this gives us peace of mind, and we can enjoy our meals without any worries.
Read more »
Poster: KIA Time: 11:10 AM 6 comments: Link to this post

A product that people all around the world can eat with peace of mind : Kochi Ice (Halal Certification received in 2013)

Kochi Ice is an ice cream maker which manufactures products that showcase the ingredients’ quality and the fact that it is made in  Kochi. President Hamamachi has made it his mission to make both the customers and supplying farmers happy, as well as bringing out the best of ice cream along with the Kochi ingredients.

This time, KIA staff and Kochi City CIR Marisa visited and interviewed Kochi Ice Headquarters, which is surrounded in nature and located next to the pristine Niyodo River in Ino Town.
What made you decide to get Halal certification?
We got it in order to have more people all around the world enjoy our Kochi-born products with peace of mind. In 2013, we were the first in Shikoku to receive certification from the Nippon Asia Halal Association. Our chance came in Malaysia, when we went to a business expo and we began to study Halal. Currently we export to Hong Kong, Singapore, Thailand, Dubai, and we exhibit at food fairs held in Islamic regions. Lately, we have begun to wholesale to stores within Japan which use Halal items for business purposes.
Read more »
Poster: KIA Time: 10:35 AM No comments: Link to this post

Place / restaurant where Halal food is available in the prefecture

Lots of bugs seem to appear in houses here in Kochi…please tell me how to prevent them from getting in!! 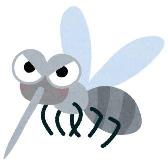 Q: Mosquitoes
A: Mosquitoes can become the carriers of infections so it is important to take precautions against them. Mosquito coils (katori-senko) have been used in Japan for many years and their nostalgic scent is associated with summer. There are other products, such as ones that omit electromagnetic waves which mosquitoes dislike, and make it difficult for them to go near them, and insect prevention sheets, which you hang out on the balcony, are also effective. All of these are possible to obtain at a home center or supermarket.

Furthermore, if water gathers close to your balcony or porch (genkan) frequently clean it up to make it harder for mosquitoes to breed there.
Read more »
Poster: KIA Time: 9:43 AM No comments: Link to this post